It’s a wrap. Two days of SQL in the City are complete, and I’m back at home, almost feeling normal. I prefer short trips to the UK, but this one was extra hard since it was a conference schedule. For me that’s up at 6:30 to run and usually not getting back to my room until 10:00pm. Long days.

The event was great. If you haven’t been, or wonder what it’s about, SQL in the City is a day of training from Red Gate Software. We do have a track that talks about how to use our tools, but we have two tracks that are mostly technical information. Brad, Grant, and I do mention Red Gate tools, but we aren’t really there to focus on the tools. We’re there to talk about technical subjects and ideas.

Think SQL Saturday, but a bit more “posh” and sponsored by Red Gate Software. Not this posh: 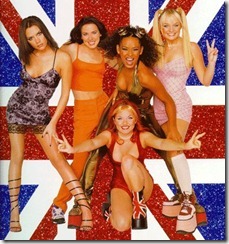 Once again this year the event was held at the Royal Society of Medicine in London. We had a tremendous number of people sign up, so we added a day and ran the same one day conference for two days. Friday was packed, with over 400 people coming to learn a few things about SQL Server.

A note for the US: We’re bringing this event to the US in September and October, touring 5 cities in two weeks. We’ll also be in Seattle on the Monday before the PASS Summit.

A note to the UK and Europe: Let us know if you enjoyed it, missed it, and want us to come next near. I’d like to do more of these if there is a demand.

One of our two joint-CEOs, Simon Galbraith, opened the event, giving a short keynote on building software. For those of you used to long-winded, marketing filled keynotes, take note. This was 10 minutes, about 10 slides, 3 laughs from the audience, and that’s it.

Then it was time to learn. I watched a session from two Red Gate employees, Dave Atkinson and David Simner, on Continuous Integration (CI). If you aren’t using CI in your software process, you should. They showed how this process works, and how it has helped them build software quicker, and more bug-free. A few of the Red Gate tools make this easier, but there are many ways to do it.

I’ve never used CI before since the last time I developed software in a team was almost a decade ago. I realize now that I was really missing something. There aren’t a lot of cool, new things that I think have come through our industry, but this is one of them. Read the white paper we have, and start learning more about Continuous Integration.

There were a number of other talks on database maintenance, writing T-SQL, and more. I did two, one on preparing for disasters and thinking about things ahead of time and one on Contained Databases and AlwaysOn in SQL Server 2012. Grant talked about Sandbox development and monitoring your servers with the ring buffer (an amusing talk with movie photo quizzes included). 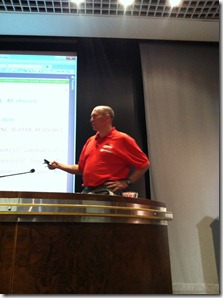 This was a little more of a formal event than most SQL Saturdays. We recorded the event, and while the videos will only be available to attendees for the next few months, that does mean that if you missed a session, you can watch it.

We also had a very hard working staff, including product managers 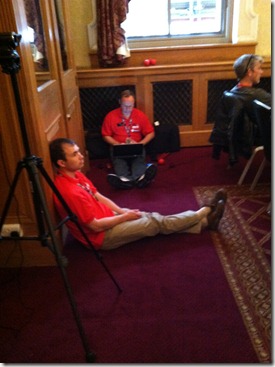 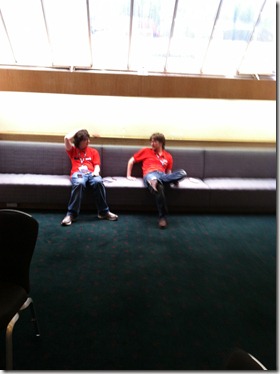 and quite a few people from all parts of the company.

We also had a nice happy hour with a few prizes. A SQL Toolbelt from Red Gate first, and then a ticket to the PASS Summit 2012. That one had quite a few people hurriedly filling out their evaluation forms.

This was a great time, and though it was hard and long for me to speak two days in a row, I enjoyed the trip. I got to run through Hyde Park (haven’t done that in 25 years) and Regents Park (never done that), and had the chance to meet a lot of people from the SQLServerCentral community, including a few I’ve corresponded with for years.

The US tour starts in September. The cities and dates are:

I’ll be at all of them, along with a crew from Red Gate and a few guest speakers from the local areas.

This is a great chance for free training, one that we think is worth a day of your time. Sign up today if you’ll be near one of the events, and I look forward to shaking hands with you if you attend.

Editor, SQLServerCentral
View all posts by way0utwest →
This entry was posted in Blog and tagged Redgate, speaking, SQL in the City, syndicated. Bookmark the permalink.