My company, Red Gate software, has given me a 6 week sabbatical. I’m documenting the time with all the posts under a tag if you want to follow along.

Not a productive week on the sabbatical, at least in terms of what I wanted to accomplish. This coming week is semi-busy with volunteering on Wed and Thur as well as a holiday Fri, so I decided to catch up this weekend.

Saturday was mostly working in the garage, cleaning the shop, building some small drawers for pieces and parts, and organizing a touch more. It was windy outside, so I didn’t want to joint and plane wood.

Sunday was much better. It was calm, and with a cup of coffee, I set up the jointer to square two sides of my new 2x4s and then planed them to thickness.

With the wood ready, I put it on the jig and cut it down to size. Once I was done, I tried to flip the pieces over to see if I could trim them again to give me spares, but they were too small.

It was hot, and I was ready to break, but I decided to see how things look. I grabbed all 8 pieces and laid them out on the bench. The jig is on the left, the flagpole on the right. Looks pretty good.

As you can see, the top is four small pieces. 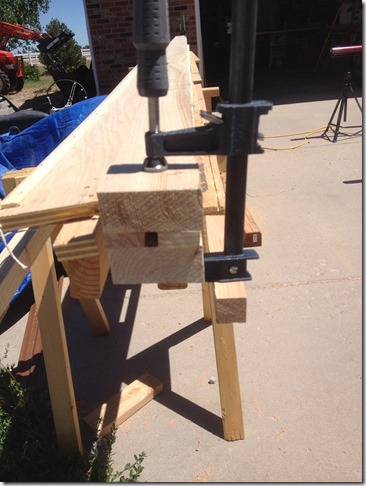 The bottom, as expected, is four larger sizes, with more space. 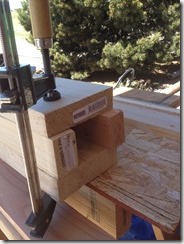 Overall, things look pretty good. The two things that have me slightly worried. The first is that the top board, the shorter of a 2×6, is slightly twisted. It doesn’t lay flat with the other boards. I can clamp it down, so it’s probably OK overall. I think I’ll try it and see.

The other worrisome thing is that two of the joints, one on a 2×4 and one on a 2×6 are only about 6” apart. The directions called for all joints to be at least a foot apart, but in this case they aren’t. Not sure if it’s a big deal yet. Stability is an issue, but once it’s glued to other pieces, I’m guessing it will bear up well.

Worst case in both situations is that I need to recut wood. I won’t take the jig down for now, and if I need to, I think I can build another one quicker.

Tomorrow I’ll cut biscuit slots (a few were marked today) and glue up the sides. I need to cut some stands to raise the pole up, but I think that should be fairly quick. If that goes well, I’ll buy a large router bit tomorrow night and work on rounding Tuesday.