My company, Red Gate software, has given me a 6 week sabbatical. I’m documenting the time with all the posts under a tag

I was hoping my router bit would arrive early Friday, but I actually got lucky and the UPS guy brought it late Thur night as I was heading out with my daughter on an errand. With that in mind, I got up Fri morning and started to work.

I was prepping things in the morning and realized I had a problem.

My variable speed router has these wings for a collet and they prevent a large bit, such as this one, from being used. I have another router, but it isn’t a plunge, nor variable speed, and with a bit this large, you want it spinning relatively slow.

I checked a few sites and many people have recommended just cutting these off. I’ve never used them in the 4 years I’ve had this router, so I decided to do just that.

I grabbed my Dremel tool and added a metal cutting bit. I put the plunge base in a vise and went to work. Having cut metal before, I learned to put on long pants, long sleeves, get gloves, and use a hat with eye protection. My full face plastic visor was handy. It was slow, but I cut the wings off.

Now I was ready to work.

The idea was to take the 45 degree cuts I’d made on each side and apply the roundover bit to create a pole. I set up the router with my bit and started at the top of the pole. 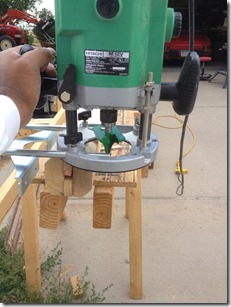 I went to work, cutting down each side and back up the other.

With a couple of trips, things were looking good.

I flipped it and managed to rout all sides. One wasn’t quite a clean cut as I think I cut a little deep with the circular saw, but overall things looked good.

I started to sand the whole thing with 80 grit on the belt sander, but weather came in with some rain drops, so I bailed.