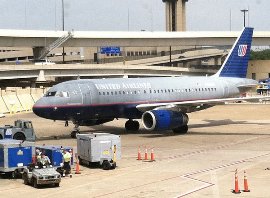 This plane left without me 😦

Recently I had problems with one of my flights. That’s nothing new, and as Grant Fritchey noted, I tend to anger the travel gods for some reason and often find myself in situations that make me regret ever leaving the ranch. In this case, I flew to the Dallas-Fort Worth airport, which was fairly close to SQL Saturday #63. I attended the event, and drove back early Sunday morning in time to have some coffee before my flight. I walked in, went straight to security with no bags to check and a mobile boarding pass. I scanned my phone 4 or 5 times before the security guard told me to leave.

Actually he didn’t tell me to leave, and was very polite in asking me to go check with the airline for a new boarding pass. The airline agent informed me that my flight was out of Love field (new service starting that day) and despite my early arrival, I wouldn’t make it to Love field in time.  I was stunned as I had booked a flight like I normally do: pick an outbound flight, then an inbound one. I  have never been presented choices from a different airports for the return flight, but in this case that was what happened.

I could have gotten upset, especially after spending 5 hours in the DFW airport waiting for another flight. Instead I tried something else. I sent a nice note to Expedia, letting them know that despite my issues, I am pleased with the way that they provide a booking service on the web. I have used their site for years, and it’s been a nice tool for me, allowing me to keep all of my data in one place. Their services have expanded over time and I like their service. I then told them of my issue, and noted that it might have been a bug or a glitch, but in any case, it was an inconvenience for me.

It was a strange situation for me, and a convergence of a few things. My inattention to detail, new service for an airline, and a large city with multiple airports. I rarely fly to cities with more than one airport to choose from, and was willing to accept some of the blame. However I also know that application developers try to build applications that work, and a little praise is always appreciated.