Recently I was looking to generate a quick workload against an instance. I wanted to add to the amount of work my system was doing by executing a number of queries simultaneously. There are a variety of ways to do this, but I just wanted a quick set of queries. I’ll show a couple ways to do this and then look at a few other tools in later posts.

I can open queries in two windows in SSMS. Note, each of these will execute 50 times.

Now I have two windows, and I can click execute in one, then click to the other, and click execute again. That’s easy. When I do this, I’ll have two threads, each running a query 50 times.

A better way is to use a SQLCMD call with my query in it. In this case, I’ll create a notepad file and add multiple SQLCMD calls in it.

The key here is the “start” at the beginning of the line. This will spawn a new thread with the program being called in it. In this case, I’ll get 5 windows very quickly, each running my query. My query is in another file: 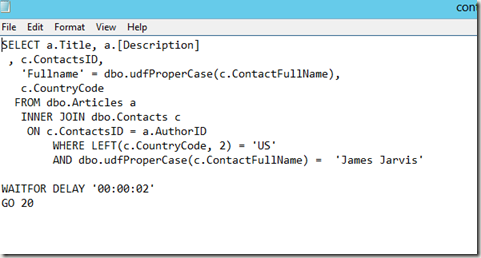 If each query is set to run multiple times, I’ll have a simple load generated. In my case, I’ll run the .CMD file from the command line, but I could double click it. When I do, I see this: 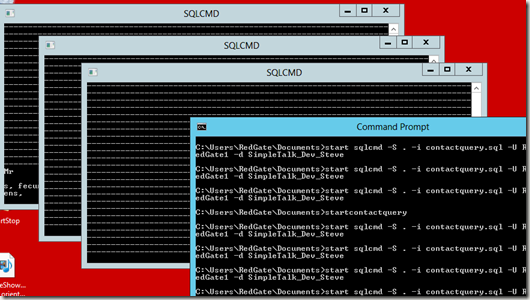 You can see the window where I started the queries in front. Three of the command windows are in the background, each of them running queries over and over. The output from the query, with all the dashes for spacing between the headers and data, are in each window.

Editor, SQLServerCentral
View all posts by way0utwest →
This entry was posted in Blog and tagged software development, sql server, syndicated. Bookmark the permalink.
%d bloggers like this: