Exploring the Caves of Code Analysis in #SQLPrompt

I enjoy themes, and when I ran across the SQL Prompt Treasure Island, I had to take a few minutes and go through it. I wrote about a few of the items, and this post continues on with a feature that was added last year to SQL Prompt, Code Analysis.

One of the big leaps forward for computer science, in my opinion, was the development of various static code analysis (SCA) tools. These are automated programs that examine the structure of source code and look for potential issues with the way the algorithms are implemented. This was originally the job of a fellow programmer, and still is in many cases, but humans make mistakes, and reviewing someone else’s code is a tedious, somewhat boring task. Over time, many humans become worse at it as we look for certain issues, but may ignore others.

Over time, SCA tools have included scanning for potential security issues, such as buffer overruns, which can easily permeate many systems if the developers do not follow coding practices designed to avoid issues. I wish we had such advances in SQL tools, but they’re not here yet.

In SQL Prompt v9, Redgate added some SCA features. These were a set of rules that are used to scan your T-SQL code for potential issues. such as casting data types without specifying a length, or as the Caves of Code Analysis post shows, forgetting to qualify an object. In my example below, the green squiggly line below the code represents an SCA finding, and as I’ve hovered over the line, I see the warning about an old style join.

Each of the rules is designed to highlight some issue that is known to be a potential problem. For the most part, these are useful tools and you should use these to examine your code. Some, however, aren’t useful and can be annoying.

There is a dialog that allows you to enable or disable any of the rules, which are divided into different types. I often disable ST002, which deals with aliases. I prefer the old style equal sign as opposed to the AS syntax. This isn’t a code issue, so I don’t need the warning. 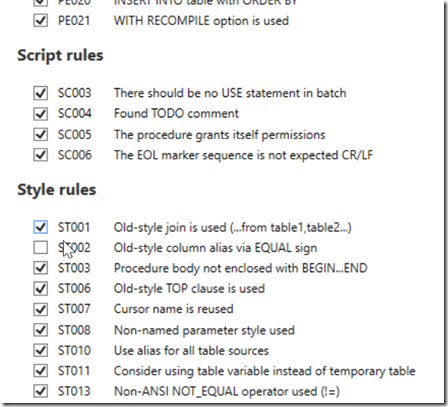 This is a basic set of SCA tooling for T-SQL code, but it does serve to educate newer developers about the dangers of using certain patterns in their code. It also reminds experienced people if they’ve done something like used COUNT() in a test instead of EXISTS(). Those types of changes can often improve the overall quality of your code.

Give SQL Prompt a try today and I’m sure you’ll be pleased with just how quicker you can write code and learn about the potential issues you’ve been including in your code.

Editor, SQLServerCentral
View all posts by way0utwest →
This entry was posted in Blog and tagged Redgate, SQL Prompt, syndicated, T-SQL. Bookmark the permalink.

2 Responses to Exploring the Caves of Code Analysis in #SQLPrompt