I had my 24 Hours of Pass session today, Database DevOps to Ensure Compliance, and my demo broke. At least, it broke for me. I kept going and talked over things, but I hate that. It would have been impressive if it had worked.

In a live session, I might have debugged this a bit more. I’ve had things fail a few times over the years, but before I was doing the DevOps thing, I couldn’t usually figure things out until I got back to a desk. With DevOps, I’ve solved a few things with the instrumentation.

In this case, I was cognizant of time, as another session was starting after mine, without the break that usually comes. Plus since it’s online, I can’t tell if anyone really wants to know what happened.

I do, and as soon as the webinar ended, I looked at the release and realized what happened.

I had this error.

I’d made four changes in Development that were supposed to deploy through to Production. I know they do because I’d done this not 15 minutes before the webinar, so the process was working. No errors, so what was wrong?

One thing I’d done was to practice a change, which created a build. I didn’t deploy this forward, so it was essentially sitting in the VCS, but wasn’t in downstream environments. When I looked at my release, I saw this: 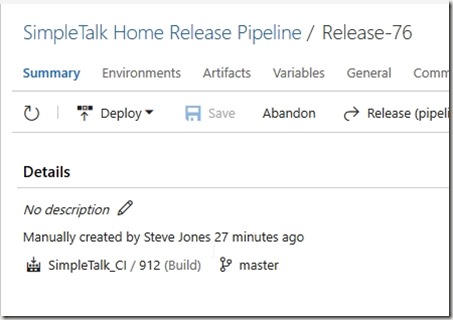 Note the build number above, 912. This was my previous build. As soon as I clicked to the CI process, I saw that my last build was 914.

I’d been in such a hurry to kick off the release that I clicked too soon. The build completed, but the release page hadn’t gotten an update and picked build 912. Since I hadn’t deployed this, I didn’t get the warning that I was re-deploying a build that had already gotten to the QA database.

I created a new release after the webinar, and it went. With ultimate confidence in myself, I just sent it to Production from QA. 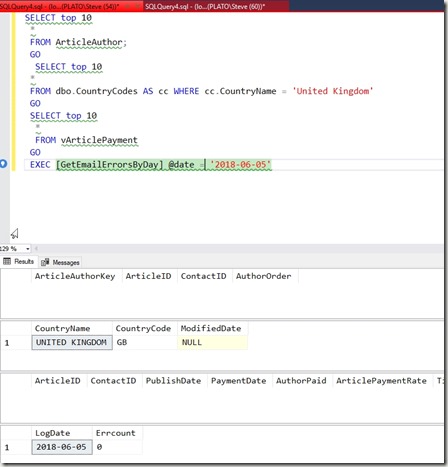 Apologies for the issues. I’m not sure why Visualstudio.com was so slow here. Apparently the audio worked, so I’m guessing it was their site.

In any case, I’ll be hosting a webinar doing DevOps in a slightly different way on June 28. Register and join us if you want to see something similar but different.

Editor, SQLServerCentral
View all posts by way0utwest →
This entry was posted in Blog and tagged DevOps, syndicated. Bookmark the permalink.

1 Response to DevOps Debugs the Demo