How Would Level 5 Self Driving Work?

We had an incredibly cold front move through Denver last week. It was 46F one early afternoon, which dropped to 0F by the evening and down to around –15F overnight. Crazy cold, with snow.

Driving the Tesla was interesting.

This is part of a series that covers my experience with a Tesla Model Y.

I went to the gym the next day, and saw this as I headed out of the neighborhood: 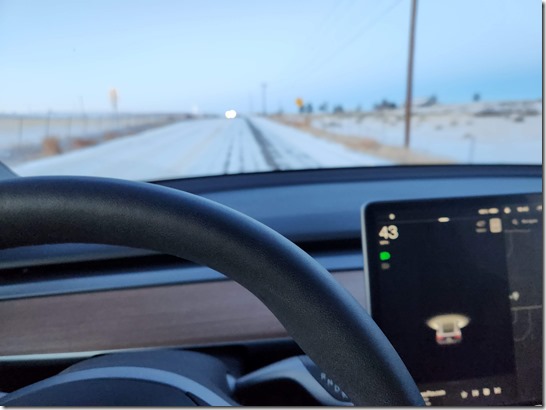 It’s not a great photo, but what I noticed was that the 43mph had the D above it, for Drive, but not steering wheel for Autopilot. I use it on this road at times when traffic is light. You can somewhat see the road is a bit visible, and you can see some of the yellow through the snow in the middle, but no right line.

The cameras can’t tell where the road is, so they won’t let the car drive. I’m not sure LIDAR or RADAR, or anything would work here.

Here’s another shot in town: 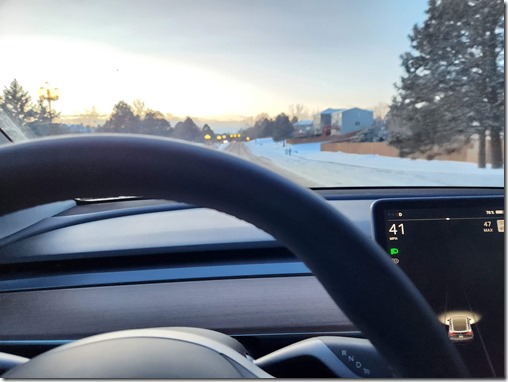 One other interesting note, a few days later, I was driving this same road, but more snow had fallen against the center curb. In essence, the middle lane was narrower because of snow piled up on the left side (in the image above).

I got repeated “lane departure” warnings, well 2-3 in a 1/2 mile, as the car thought I was crossing the lane boundary on the left. Strange, and disconcerting.

The next day as snow was melting, but the roads were very dirty, the car struggled to find the middle dividing line. I could see it as a human, but it was dim and barely visible. The car swerved a few times as it couldn’t always see where there was a turn lane on either side (L or R).

This is a great example, to me, of why Level 5 is not likely to occur for cars. Maybe Level 4 within certain conditions and in well mapped/known locations. Or perhaps with sensors in roads that cars read. However, a little snow (this was 2-3 inches) has blinded the car.

Humans drive on these roads all the time in snow. To be fair, many drive poorly, and often they don’t know where the lines are. However, we negotiate. We slide our car slightly left or right when there is other traffic. We aren’t perfectly in the lanes, and depending on the plows, we might end up “losing” a lane and just working with one path that isn’t really in either lane.

Can computing learn to do this? Maybe, but it’s feels like an even more complex problem, especially when you now are asking the computer to react to how other drivers are moving on the road. Negotiating a route with them. Can a computer see another driver wave them on or ask them to stop?

Tesla isn’t Level 5 or anywhere close. It’s Level 2, and perhaps Level 3 with the beta self-driving software (which I haven’t seen). I don’t know that I think anyone is closer, though I’ve heard the Google/Waymo taxis in Phoenix are pretty good. I’d like to try one and see, but those aren’t Level 5.

I’m not sure I would trust Level 5 if someone claimed it, at least not unless every other vehicle was also a L5 controlled car.

I do enjoy Autopilot and it was worked well for me. The FSD version was OK, but not enough better for me to subscribe to it. I look forward to cars becoming better and safer, but I’m not expecting to be able to go to sleep in the car and have it take me to my destination anywhere, anytime. I just don’t think L5 is anywhere within reach.

Editor, SQLServerCentral
View all posts by way0utwest →
This entry was posted in Blog and tagged car update, Tesla. Bookmark the permalink.

1 Response to How Would Level 5 Self Driving Work?