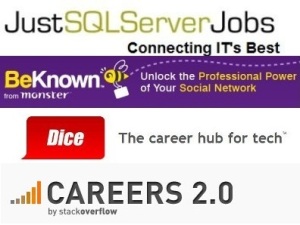 IT Jobs are everywhere. Check out the listings on any of these sites.

Is it a good time to be in the technology business? I think so, as the US unemployment rate stands at just above 9%, but the rate in IT is listed as about 4%. There might be some errors in how they are classifying and counting IT jobs, and the unemployment is not evenly distribute across the US, but that still seems like a significant difference. As a comparison, much of the medical profession is similarly employed, as are teachers (yeah!), but construction trades are showing  > 20% unemployment.

Not only are there lots of jobs in the technology area, but overall technology pays a much higher salary (or wage) than many other industries. Whether you think you are paid well or not, peruse some other professions on Dice, Monster, or another job board and compare salaries. Keep in mind the US median income is $48k, meaning half the people make more and half make less. I suspect most IT workers are in the “more” side of that range.

I think it’s also likely that the unemployment rate in technology could decline further. There’s an interesting report from Dice (2MB PDF) that indicates we are in a talent crunch as well that could become more problematic in the future. More than a few places predict that we will have a shortage of skilled technology workers in the future. Some of those predictions are based on enrollment in college math and science programs, which can be faulty. IT work doesn’t require a college degree, and perhaps shouldn’t.

However it does seem that we have an ever increasing need for people to work in technology. I’ve had friend worry that our own efforts to improve and automate things would result in fewer jobs, but it seems that’s not the case. The gains in individual productivity in both the development and administrative areas are easily outstripped by the huge growth in the numbers of applications and servers to manage.

Hopefully you have a good career in IT, and will have one for as long as you want one. I’d caution you to think carefully about the title of this piece. There’s a crunch for talented people, not just people. You need to work on your technical skills, and your soft skills, regularly if you want to be in demand in the future.