I ran across a question on Facebook, of all places, the other day. Someone had asked a friend how to return a value from a procedure and assign it to a variable. My friend answered, but in the discussion, I noticed the poster was looking to return @@IDENTITY to the calling procedure as the value of the row that was just inserted.

Don’t do that. At least not without understanding the potential issues.

It’s been years since I’ve seen @@IDENTITY in use, and for a number of years before that, this was an easy “weed out” question in interviews.

How does this work? Let’s create a simple table with an identity. I also create a logging table and a trigger that will add a message to my logging table when I add a row to the first table.

If I run this, what do I expect to be returned?

However I get this. A 56 in my result set for @@identity. 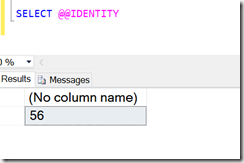 The reason is that the last identity value was 56, from the logging table. The order of operations is

That’s often not what we want when capturing an identity value. What’s worse, this behavior can exist, but not manifest itself until someone changes a trigger later.

If I change this SCOPE_IDENTITY(), I get a different result. 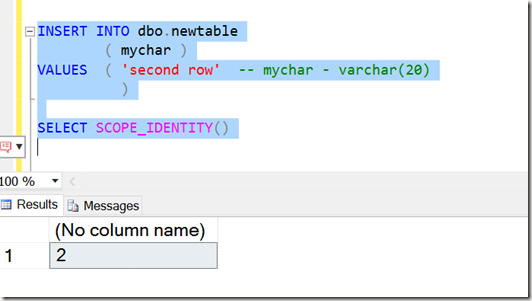 This is because the SCOPE_IDENTITY() function takes the scope into account and doesn’t get reset by the trigger code.

This took some time to write. Mostly because I had to setup the demo, test things, and then get the explanation straight in my head. It took me 15-20 minutes, including lookup time in BOL, but if you are new to writing, this might take a bit longer. You’d also want someone to review your explanation since this can be tricky to explain.

Editor, SQLServerCentral
View all posts by way0utwest →
This entry was posted in Blog and tagged SQLNewBlogger, syndicated, T-SQL. Bookmark the permalink.