I used to travel a lot. Last year I flew over 140,000 miles in the air, drive another 1000 or so on vacation, and visited numerous countries. It’s hectic and hard at times, but it is very enjoyable when my wife comes with me, which I plan on happening more and more.

Not this year, but while I only have one plane flight this year, I’ve still gotten out and about a bit. In fact, I hit a travel milestone for myself recently. I was in two cities named Keystone inside of a week.

I’ve never been to Keystone, SD, but I’ve been close before. This is on the East side of Mount Rushmore, where I’ve been many times. We found a new campground there this year and drove up to Keystone one night for dinner. It was a great week where I was unwired and recharged with family. 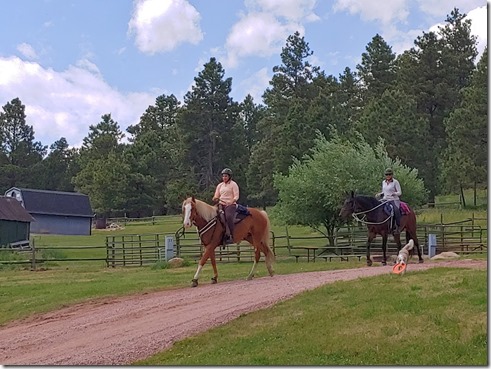 This was my daily view, watching my wife and daughter ride their horses.

Less than a week after we came back, I drove up to Keystone, CO. My wife and I own a condo near the ski resort there, and I went up to work for a few days while there was construction at my house. My wife joined me and we had a couple nice days over the weekend relaxing.

This was my work environment.

It’s a silly milestone, but when you like to travel, and you get to do it, you look for little things. This was interesting for me, unplanned, but a funny coincidence. I hadn’t known there was another Keystone within driving distance until late May. I hadn’t planned on going to our condo until a couple weeks before when we scheduled the construction work.

It all worked out, and I was lucky to get two vacations in about two weeks in towns with the same name.

Editor, SQLServerCentral
View all posts by way0utwest →
This entry was posted in Blog and tagged Humor, syndicated. Bookmark the permalink.
%d bloggers like this: