We got a solar system in 2022 to try and fix some of our power costs and hedge against the future. We were fairly confident it would work well, but weren’t 100% sure. So far, it has reduced our power bill quite a bit, though it’s a bit hard to tell right now if this is actually saving much money.

However, the performance is above what was estimated. I’ve built a Power BI Report that tracks the actual production v the estimates. So fat, almost every month has beaten estimates and our power production is well above what we expected.

Given the fact that power prices have increased in CO and I expect more increases to come, this is nice.

I can’t embed the report here, but this is an image of the report: 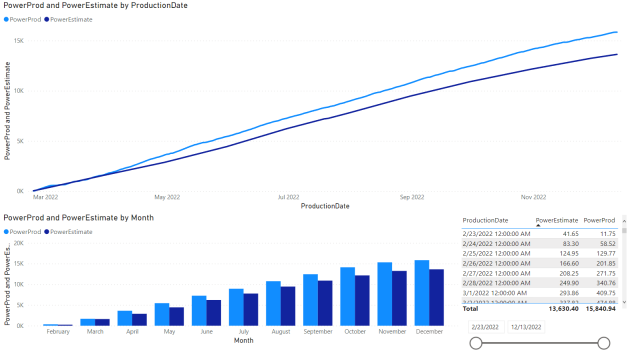 I need to add some more costing here, but our current bill is often around $22/month, of which $13.50 is a connection charge. Usually we are paying around $8-12 of demand charges for peak usage from 4-8pm. Hard to get the family to slow down here, and there isn’t much solar during this time.

This is, however, much better than last Nov/Dec, when we had $220 bills. Even with the loan payment, I think we’re paying less than in the past.

Editor, SQLServerCentral
View all posts by way0utwest →
This entry was posted in Blog and tagged solar, syndicated. Bookmark the permalink.