This is part of a series where I set up a virtual lab for testing and misc work. The other parts in the series are here: Building a Virtual Lab with Hyper-V.

I haven’t had a good lab set up since I moved from VMWare to Hyper-V on my systems. Since then I’ve had a number of random VMs set up, but none connected in any meaningful way as a domain. They were all standalones, but that needs to change.

I wanted to do some additional testing with a few Windows and SQL features that needed a domain. So I decided to set one up with Hyper-V.

I googled around and found a few references:

I decided to try to do some of this myself, using these as guides, but also incorporating some of my new Powershell knowledge along the way. I won’t claim this is the best way to build a virtual lab, but this is the way I did it by cobbling together various piece of information.

With that in mind, here’s what I’m looking to do. I want to create a domain with a few servers and a client for testing. I plan on making this setup on a separate network, using the 10.10.10.x address space as I don’t expect to run into networks with that one at home, or work.

The machines I’m looking for are as follows. The role, OS, and then names are listed below:

I’ll be running through the process and trying to document this for myself, and others.

The first steps here are easy. I have Hyper-V setup, but if you don’t, it’s an easy confg item you can see at the beginning of this article.

Next, download software. I didn’t have Windows Server on this machine, so I accessed MSDN and downloaded Windows Server 2012 R2. I have an MSDN license, so I get a few licenses. As this was downloading, I made not of the product keys.

I’ve had a space on my machine setup. Since I used to use VMWare and Hyper-V, I have a space on my spare drive where I separate Hyper-V and VMWare. Inside the Hyper-V folder are my VMs for quick copying to my external drives and laptop as backups. In this case, I’m setting up a “WS2K12 Lab” folder.

This is a standard setup I’ve seen in all the tutorials. Create a VM, create a new hard disk (I used defaults), install Windows Server, and run “sysprep” on the VM. I did this with both Core and Standard Server. This gave me two hard disks that had images of the server systems on them. 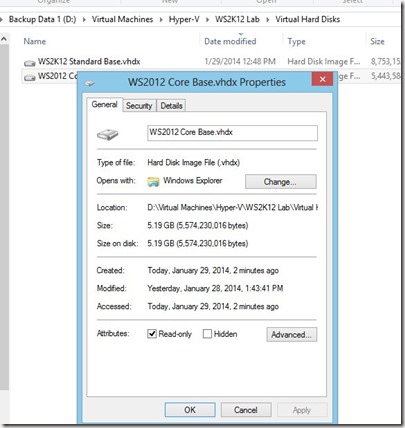 I first set these disks to “read only” and then deleted the parent VMs. This gets me the base systems on which I will build things. I’ll deal with the Win 8 client later.

That’s all I’m talking about here. I’ll move into the rest of the steps in future posts.