Closing out the week today, though things will continue over the weekend.

I got up early today, about 730, to get moving. First up, guitar. I wanted to try and get most of an hour in before yoga. A pile of stuff by the kitchen table that shows. As I drank some coffee and got shoes on, I put a second (half) coat on the new cutting board.

As you can see, I have a lot going on. A cutting board to finish, a winch to get into the riding arena, and guitar to play.

I started with a about 45 minutes of guitar. I worked through a few songs, practicing movement and then did a couple blues lessons. Not sure things went that well, and starting to use a pick is hard. I tend to finger pick, and I’ve gotten used to that. Palm muting is definitely a skill I need. In any case…

This was in the middle of my practice.

Then it was off to yoga. Friday  mornings are a class I usually attend, so I went to work a bit and relax my mind. A good, hard class, with about 1/3 of the time in my zone 2 heart rate.

I got home, ready to get a few things done. I started outside, looking to try and work on the horse shelter a bit, and seal the edges from moisture, but there was too much wind. Not my favorite place to be. However, while I was out there, my wife showed me a few bolts that had snapped. These hold the base of the fabric building down. Some have broken before, so I dragged out a drill and a tap kit, and drilled out the bolts, tapping in new threads.

Only two this time, and since I’d done this before, it didn’t take that long. Next was replacing some webbing, but I needed my wife. Since she was feeding, I went out and emptied the manure spreader. On the way back, I could see this didn’t look like a good day.

Ugly weather coming in and lots of wind, so I took the ladder down. I don’t want to be 20’ in the air with a lot of wind. Oh well.

At lunch, I worked on planning for another project. It seems this sabbatical is becoming more ranch work than house work, but that’s OK. This stuff needs to be done. I need to brace the trailer from where we feed hay. The brackets have bent, and the end part needs some support. Should be easy, but I will need to get some angle iron and cut some supports. 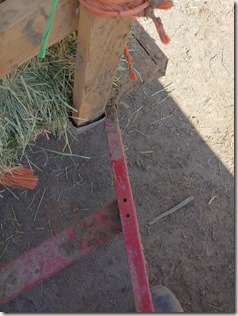 Finally, some garage project for me. I’ve been wanting to build a better miter saw station in the garage and start to add some drawers and other storage. I decided to start with the modular miter station as the first step. Once this is done, I’ll be able to then work on other parts of the garage.

As you can see, I’ve let the workshop go to pot. You can see the rolling miter station on the left, but it doesn’t really have good space or support for long pieces.

The first step is to cut some wood. I got some yesterday and I cut enough for two full supports today. I used a ladder to pile them up as I lack other space.

Next, I did some test drilling for the Kreg screws. I had to futz with this a few times, as it’s really hard to see the markings on the jig. One of the downsides of getting old.

I drilled out the side supports first. These will be the horizontal braces.

Then I screwed these into the legs. I ended up with two of these. which will support one half of the miter station. I struggled a bit to get the kreg screws tight, as I was worried about them pulling through. Once of these is a little loose, but it’s getting cold.

Enough in the garage today. Not a great start, but a start.

Now it’s time to get ready for volleyball. I need to plan the Friday night practice and warm up a bit before heading to the gym.

Not a bad week. I think I certainly had a relaxing week for the most part, though a little self-induced stress in that I felt I didn’t get enough done on the basement or garage. I’ll slightly blame weather and a slow start.

I did manage quite a bit of guitar practice, and my fingers are letting me know. I learned the basics of a few songs, with the need to practice a bit more.

I did manage to get to some workout in every day this week, which is something I haven’t always found time for with work. I got a day on the mountain, and am planning another tomorrow as my son is coming back from college for the weekend.

I’ll continue over the weekend with guitar and hopefully, the garage. I may have more when I come back Monday to start week 2.