Some time ago I had downloaded all the SQL Saturday XML files. I’ve been meaning to flatten those into a database, but that project keeps getting away from me. And now it’s become an archive task.

In any case, I’ve been looking to work with Jekyll and get a list of events. There is one at SQLSatHistory.com, but I’m going to try and do a bit more than a simple list. In any case, I have found a small issue: my files were named SQLSat1,xml, SQLSat2.xml, etc.

That’s not a big problem, but it results in my archive looking like:

The file names are strings, and in alpha sorting, 100 comes before 2. That’s not critical, but it’s not what I want, and I would like something that’s a bit better and easier to follow.

PowerShell has a Rename-Item cmdlet, which will work, but what new name? I need to parse out the filename and then come up with a new one. Likely there are better methods, but this worked quickly for me to rename some files.

My thought in doing this was first to extract out the number and then check the length. From there, I can assemble a new string. Instead, as I was starting, I thought of a better way. I decided to remove everything but the number.

There is a replace method for strings. As In, I can do this:

This will take away the string before the number, and results in file names going from:

I repeated that and removed the .xml as well, which gave me each event’s number. From here, I found a cool trick on Stack Overflow to do this. The PadLeft method is used

I use 4 as a padding factor. This results in giving me what I want, and when I concatenate this, I get the file names I want.

From there, a simple call to Rename-Item with each file resulted in an orderly list of events. 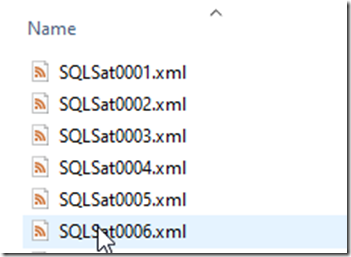 Editor, SQLServerCentral
View all posts by way0utwest →
This entry was posted in Blog and tagged powershell, syndicated. Bookmark the permalink.

2 Responses to Renaming Files by Padding Numbers with PowerShell