This series looks at the Advent of Code challenges.

As one of my goals, I’m working through challenges. This post looks at day 6. I’m going to do this one in Python here, though I did solve it in other languages in my repo.

This is another weird string grouping issue. The data load is a mess, meaning that there are groups of data I need to consider, and the groups are separated by blank lines. However, each group has multiple lines.

Easier in Python, where I can load the data line by line and break things. I do that with this code:

In SQL, it’s harder. I bulk load into a table, the cursor through the data.

Once that is done, I again have to do things differently. Python is easy, where I count the values and add them up.

In SQL, I need to distinctly find the values, for which I need a function of some sort.

Once that’s done the answer is the sum of lengths.

More complex here. Now I need to match up the common answers among the groups. In Python, this isn’t bad. I use the intersection method to find out what matches between the groups.

Fairly simple here, with the grouping of the answers in a set.

SQL is hard.I reloaded the data, and separated each group by a comma. This gave me data I could split up, keeping each group in a group. 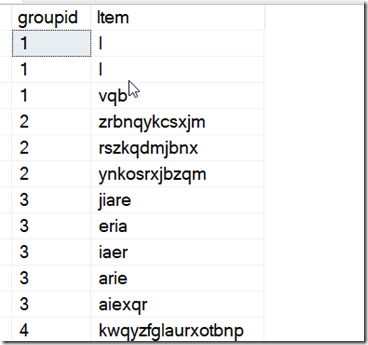 From here, I had a CTE for this, another to put these into groups of 2 strings by groupID. I then did a comparison for common characters across each group of 2 strings. This gave me partial matches, and I then compared all these in a group, taking the minimum number of matches. From here, I summed up the count of all the matches.

Editor, SQLServerCentral
View all posts by way0utwest →
This entry was posted in Blog and tagged AdventofCode, python, T-SQL. Bookmark the permalink.
%d bloggers like this: